skip to main | skip to sidebar

Television so deliciously bad it deserves its own award. 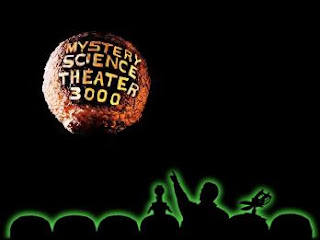 I want to tell you about one of my new favorite awful shows.  I know, why would you want to know about awful television, there is so much of it out there.  But, I am a huge fan of shows that take themselves dead serious and are hilarious because they are so bad.  It's a vice.

This show, I have found so fun to yell and throw things at that I have created an award and rating system just because of it.  The Mystery Science Theatre 3000 award.  This gets it this year.

Now, obviously I know there are probably plenty of geekishly devoted film viewers out there that have already thought of MST3K awards.  Who cares?  This is mine.

The show in question is in its second season, it's called "The Haunted Collector" and features John Zaffis ( nephew and heir apparent to Ed and Lorraine Warren of  Amityville Horror fame-or infamy) and his crew of sidekicks; or researchers-whatever-it's really not that important when it comes to entertainment value.

This gem airs on SYFY channel where you go to "Imagine Greater".  The premise is:  "Objects can hold energy and that energy can be used by ghost to haunt you."  Also Zaffis is happy to take these objects off your hands (for free) and put them in his Haunted Museum and charge a fee to show them to people.

On to the things I love about the show.

1. John Zaffis- John is from Connecticut and he has that Connecticut accent that just makes me smile.  It reminds me of my father-in-law who also hails from there and says ridiculous things just like Zaffis.  Must be something in the water.

2. Zaffis pretends to know nothing about antiques although he has been at this for over 30 years, so he always knows a "guy" in whatever town who he takes the supposed haunted items to for verification.  It's a fun betting/drinking game to just shout out what the obvious items are that Zaffis somehow can't figure out.

3. The research team.  They are so jumpy and reactive it's a hoot.  And unlike other teams, or at least shows featuring teams, they never finish anything.  Someone always freaks out and calls everyone to whatever room they are in.  There is one exception.  The lone seemingly reasonable person on the team is Zaffis' "tech guy" Brian who seems to be the only person who takes the time to debunk seriously obvious things like lights from traffic.

4. The pitch- Whensoever an antique is found Zaffis always gives the same line. "Could this be what's causing the spirit activity?  We'll never know....But I'll be happy to take this out of your house for you."  Hahahaha!  We'll never know!! At least he's kinda honest.

5. Whenever Zaffis cannot find an artifact to take home to his museum he never offers any other advise.  At least not on camera.  He quite literally tells the families/owners that they are on their own.  Geez Thanks John  -we were on our own before we payed for your travel expenses.

6. About 90% of the locations visited are businesses like taverns, casinos, B&B's, etc.  whose names are so prominently placed, so many times it's clear the only reason for calling in a ghost hunting team is to get their name on television and attract the crowds that like to go to those types of places.  The funniest example of this was one done at an off the strip Las Vegas Casino in which not only the Casino and its history were prominently featured, so was an aging "famous" Drag Queen. Win-Win!

7.  The Tech-Stuff.- The Tech stuff this team uses is silly-funny.  My favorite is the very controversial "Ghost Box" which works on AM radio waves that rapidly cycle until some sort of word comes through.  Good Googly-Moogly!  If AM or even FM white noise were an indication of Ghostly presence then I was haunted most of my childhood. ( I really wasn't) because living in the country trying to get a radio signal in the 70's and 80's brought up all kinds of weird noises, sounds and yes; even words.

But despite all of that I still have tremendous fun watching this show.  The whole gang tries to be the first to pick which item Zaffis will liberate and recites on cue "Is this what's causing the problem?...We'll never know." 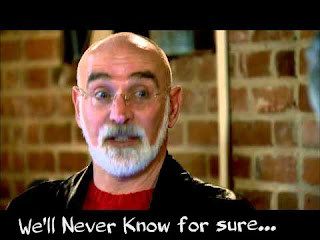 Posted by Grainne Rhuad at 3:50 PM

Grainne Rhuad
I always wanted to be Mark Twain when I grew up.

Promote Your Page Too